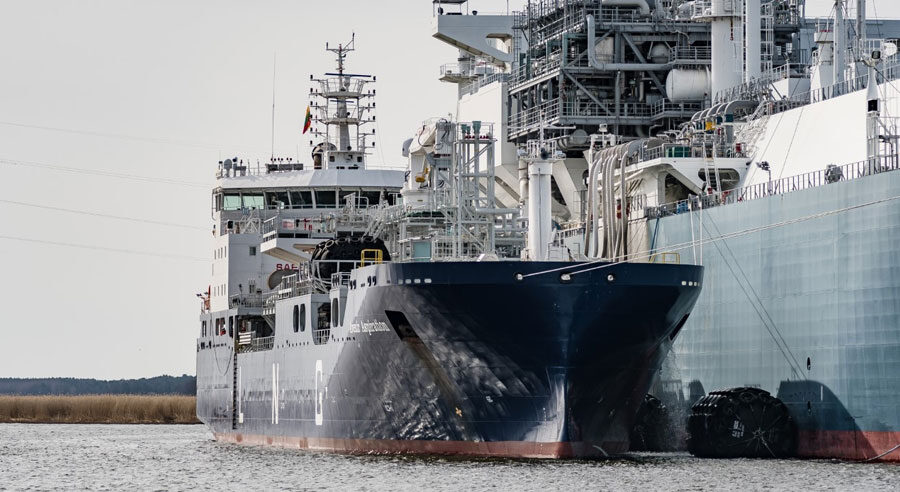 Klaipeda, April 5th, 2022 – Lithuanian gas supplier Achema Gas Trade (“Achema”) and small-scale LNG provider Avenir LNG Limited (“Avenir”) have joined forces and organized together the first LNG ship delivery to the small-scale LNG terminal in the port of Klaipeda, Lithuania. On April 1st, Avenir’s 7,500 cbm LNG transport vessel “Avenir Aspiration” loaded the molecules on behalf of UAB Achema Gas Trade at the FSRU “Independence” and delivered the cargo to the LNG reloading station. The LNG was purchased by Polish gas supplier PGNiG and will be distributed by truck to various industrial and logistics customers in the Baltics to secure the energy supply.

The start of the cooperation between the two companies marks an important milestone and is furthermore the start of operations for the vessel in Northwest Europe. In addition to transport services, the vessel will provide LNG and LBG to various marine bunker customers in the region.

Commenting on the successful operation, Peter Mackey, CEO of Avenir LNG, said “We are happy to see the start of operations for our vessel in Northwest Europe and are looking forward to provide our services in a variety of countries and ports along the North and Baltic Sea coast.”

Commenting on the announcement, Gediminas Vasauskas, CEO UAB Achema Gas Trade, said: “As small-scale LNG business is one of UAB Achema Gas Trade future strategic developments, we are very glad we could start this business along with strong partners such as Avenir LNG and PGNiG”.

Mindaugas Navikas, Chief Commercial Officer of KN, which operates both FSRU “Independence” and the Klaipėda LNG reloading station, points out that the LNG reloading operation that took place over the weekend gives even more meaning to the LNG infrastructure in Klaipėda.

“We congratulate Avenir LNG on their start of operations in the region and thank them for their professionalism and smooth execution of the reloading operation. Klaipėda LNG reloading station is designed to supply Baltic and Poland off-grid consumers and LNG fuel stations with energy resources. We believe that Avenir LNG, a growing leader in the integrated small-scale LNG distribution market, which has implemented its first small-scale LNG operation in Klaipėda, will together contribute to the common goal of creating value in the growing small-scale regional LNG market,” said Mindaugas Navikas.

About UAB Achema Gas Trade: is a part of the biggest single natural gas consumer in the Baltic states AB Achema (Part of Achema Group companies) and is one of the leading natural gas suppliers in Lithuania.

About KN: KN is an oil and liquefied natural gas terminals operator and is becoming a player in global LNG market by investing accumulated operational and developmental know-how as well as bridging energy markets by enabling our customers to supply and trade energy resources, including liquid renewable energy resources, worldwide.